Thank you for all the advice on the bias nightmare of a dress, I haven't given up on it yet, just parked it to one side.  It's good to know that we have similar ideas and I had already tried some of the suggestions before and during the 3 separate assaults on the side seams.

Another problem with bias cut patterns is that they can be fabric hogs and leave you with odd shaped leftovers.  As luck would have it the front piece of the dress with the skirt on the straight grain fits perfectly onto my leftovers so I took this as a sign and promptly cut it out.  Next step is to unpick practically the whole dress so needless to say that's as far as I have got with that! 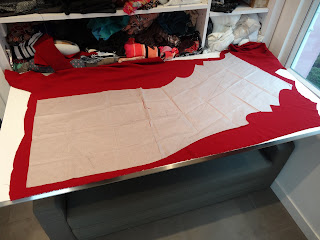 Meanwhile I am working on a jacket, this one from 08/2008 Burda in a navy superfine wool.  It has some interesting details although was originally designed to have raw edges everywhere so I am modifying it somewhat. 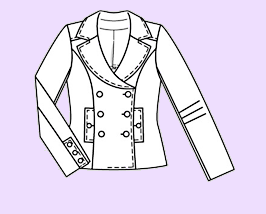 I am sure I bought this fabric with the intention of making a classic blazer so why I only bought 1.5 yards is a mystery to me and it took a while to find an interesting pattern that would work.  I managed to squeeze out the pieces for this cropped jacket but I have had to piece the facings and the undercollar is cut in a black wool.

Although making a jacket from start to finish can be a lengthy process, it does lend itself to sewing in small chunks of time which is sometimes the way I like to sew.  Here are a few snapshots of bits I've finished - sleeves and back.

Despite marking you can see one buttonhole on the sleeve flap ended up out of alignment.  I contemplated ignoring it (heck I even contemplated just sewing on buttons and not making buttonholes at all since they have no function), but I knew it would annoy me so out came the unpicker.  In the process I had an epiphany and realised the little bit sticking out the front of my buttonhole foot is there to help you line up buttonholes.

Finally my thoughts go out to anyone affected by hurricane Sandy.  Here in HK I have become a little blase about the typhoons we get every summer, but the terrible pictures and tragic stories coming from the States reminds us how powerful nature can be.
Posted by AllisonC at 17:22