This is the dress featured on the cover of the October Burda, a sheath dress with a v back and a small cowl front neckline (also available as a pdf at the link below).  It's not too clear from the line drawing, but the vertical darts are open at both ends on the back and open at the top on the front.  I've also made the top version of the dress (110) and the matching capelet (108).  The construction is identical, but the look is so different that I'll put that in a separate post.  If you want to make both the dress and the top and don't have the magazine then don't buy 2 pdf patterns, Burda really should bundle them together I think.

(Edited to add : thanks Sue for pointing out that today only (2/12) the top pattern is available for just 25 cents!) 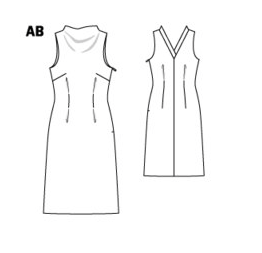 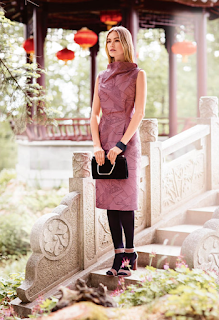 I used a textured stretch cotton jacquard, but - and this is a big but - I didn't even notice I had cut it with the stretch going vertically until I tried it on before finishing the side seams!  Surprisingly it wasn't the disaster it might have been, but getting it on and off was a very undignified affair so my plans to skip the zipper went by the wayside and I inserted an invisible zip in the side seam.  With a stretch fabric used properly you may be able to skip the zip, you definitely can on the top (my top is in quite a heavyweight ponte so the drape is similar to this dress fabric). 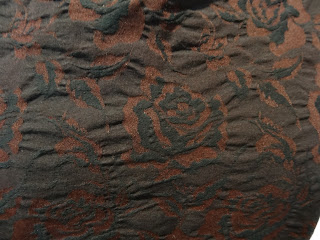 This dress is the sewing lesson for the month so the instructions are more detailed than usual and also have diagrams so it's a good one to try if Burda's instructions are too minimal for you or you are a Burda beginner. 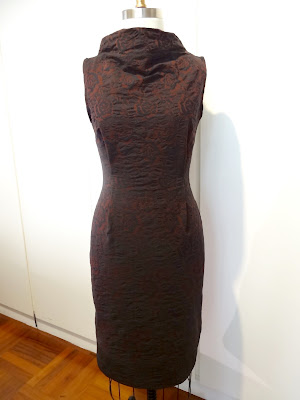 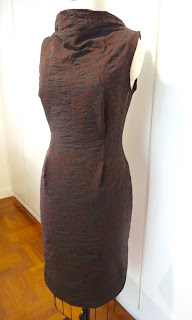 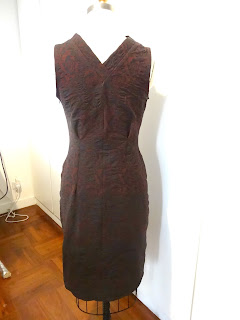 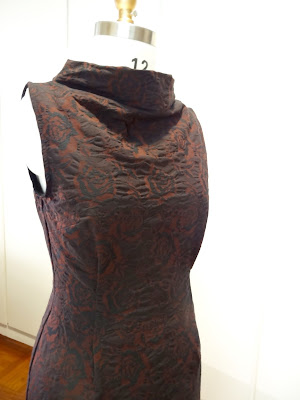 It is a pretty straightforward sew, the only fiddly bit is attaching the back neck bands which are extensions from the front piece and wrap around after joining the shoulder seams.  Rather like sewing an inset corner, you need to carefully mark the point where the band meets the centre back seam and stitch the 2 sides one by one so you can finish exactly at that centre back point.  Mine is pulling a bit even after doing this - it's quite bulky there -  so maybe basting each side separately first would be a good idea. 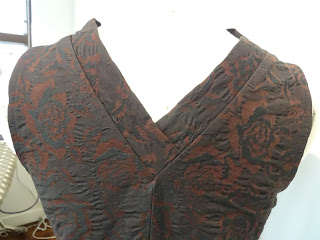 I cut the armhole facings from some scraps of black ponte just because I thought my textured fabric was a bit lumpy.  After attaching them, I decided to topstitch the armholes and trim off the excess.  I also sewed a deep hem by machine, nothing really shows in this fabric.

I like how the stiffness of the fabric makes the collar stand up at the front, I like this kind of structural detail.  Despite my silly error in cutting - and I'm still not sure if the stretch went along the selvedge or I cut it by mistake because I have none left - the dress worked out well and had enough give in it for me to comfortably wear it out to dinner. 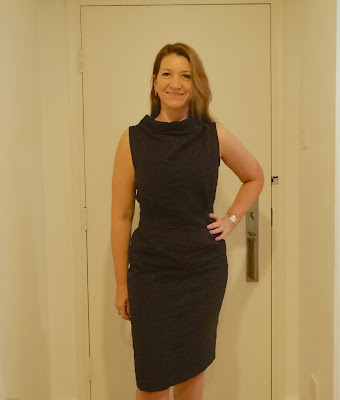 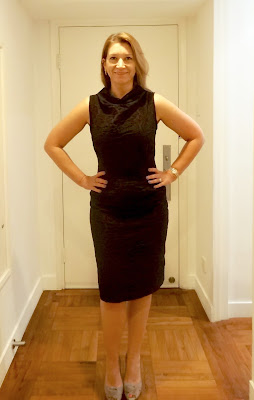