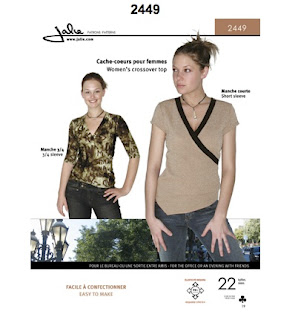 I must be one of the last people on the planet to make up this pattern, there are lots of great reviews on Pattern Review so I thought I would try it.  I bought this pattern some time ago and of course it has been gathering dust since then.  I had a small piece of black and white jersey purchased as the end of the bolt that I could just squeeze this top out of and I used some black jersey scraps to make the contrast bands. I made the short sleeve, straight hemmed version. 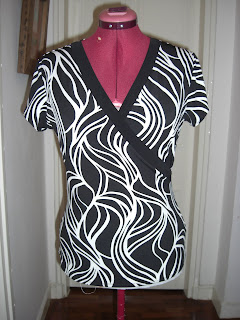 I've never made a Jalie before so went with the size corresponding to my usual BWOF 38 - a U (or medium or US 10).  Straight out of the envelope the fit is really pretty good, possibly a bit roomy under the arms, but at least I don't need an FBA with this size.
It's very simple to make and the instructions are good, except the written instructions and diagrams are printed on the pattern paper and I had to keep opening it up to see both at the same time.  But I probably won't even need the instructions next time so it's a minor gripe.  I made this entirely with the serger so it took around 1 and 1/2 hours all in, the next one should be even quicker now the pattern is traced.  One important thing to note if like me you are used to Big 4 or adding your own seam allowances - they are 1/4 inch. The only small change I made was to stitch the fronts together at the crossover point to stop any possible wardrobe malfunctions. 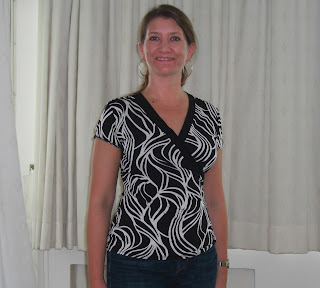 I'd definitely consider trying some more Jalie knit top patterns based on this one and I'm sure I'll be making this one up again.
Posted by AllisonC at 14:57