This is one of the new dress patterns I purchased recently - McCall's 6163 mock wrap dress - originally because I planned to make a long sleeve version, but I was too slow for that so it is fortunate that this pattern has a few sleeve variations. 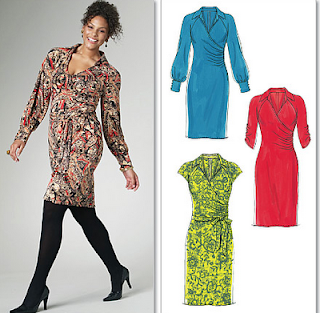 Gail warned me in the earlier comments that in the wrong fabric the front can look a bit sad and droopy, while the reviews over at Pattern Review mostly said it made up unusually small for a McCall's and to go up a size.  I mostly use either BurdaStyle magazine or Vogue patterns and while you might expect Vogue and McCall's to fit the same since they are the same company my limited experience with McCall's has shown that is not the case at all.
Anyway, long story short, my experience was similar to Gail's, I cut a 14 rather than my usual Vogue 12 and it was huge everywhere.  I took in every seam, including the raglan sleeve seams, a lot to make this wearable.  I'd say it is about a 10 now with smaller sleeves - I remembered to make the adjustments to the pattern pieces for next time so I can make use of the other sleeve options sometime.
After all the messing about with the neckline the collar needed a lot of adjusting too and mostly due to laziness I just used the collar band pieces to make a mandarin style collar and left off the collar itself.  The belt doesn't do anything and can be removed, but I think it kind of adds to the illusion of a real wrap. 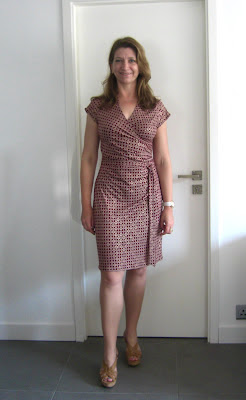 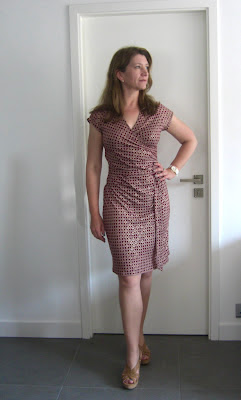 The dress looks a lot more flattering in the indoor photos, I think because the sun is casting such strong shadows in the outdoor one, but mustn't complain about that!