I realised the other day that the black shirt I was wearing was well past it's best so I purchased 4 yards of black stretch cotton to make a couple of replacements.
I still wanted to try something a bit different rather than remake the same pattern though so flicked through my Burda index file for inspiration.  I picked this simple shirt with cutaway shoulders from 03/2006 - 104. 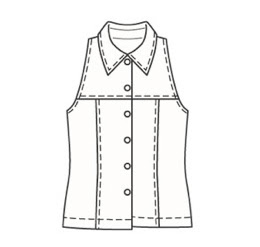 It was easy to make and I am really happy with how it turned out - the only change I made to the pattern was to do my own thing with the button placement.  Of course you need to wear a strapless or halter bra with it. Definitely worth a try if you have this issue taking up space somewhere, I will probably make this again.
This is the best I can do with photos of a black garment... 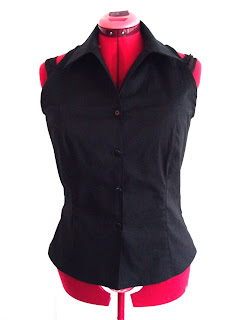 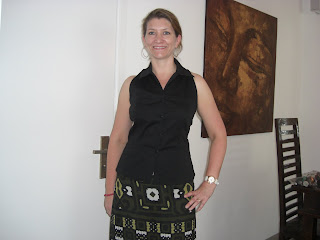 If you have already read Slapdash Sewist's blog you will know she is en route to Hong Kong right now!  We are meeting for dinner tonight and for shopping tomorrow, it's really exciting.  I will try and do something about my hair before I go to meet her.......
Posted by AllisonC at 15:28 19 comments:

One miss, one hit

Ok lets just get this posted and out of the way - the miss. Not quite a wadder, just not what I had planned in my head. This is the pattern I used - Burda 06/2008 103, a mock wrap skirt with topstitching detail.

There is nothing wrong with the pattern, but in my eagerness to make it I pulled some blue denim from the stash (or collection if you prefer!) which was a great match colourwise for the art nouveau fabric from my last post (thank you Katharine for the perfect description!). The weight of the denim is all wrong for this pattern and the style with a tie waist is all wrong for the longer length tops I wanted to wear it with, it just adds bulk. I'll hang onto it till the winter and see if it works with a tucked in sweater and boots. 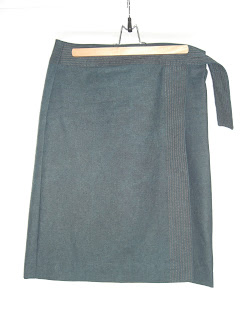 Moving swiftly on - a new dress, this one from Burda 05/2008 116, a square neck sheath dress. I made this in a print cotton I picked up in that ramshackle market I posted about recently. It's black with a silver chain print on it. It also has some printed discs with the name "Todd Smith" on it. 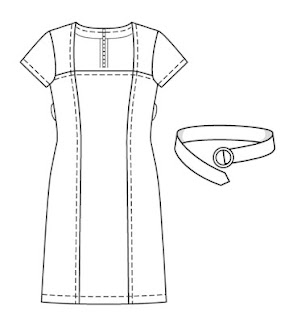 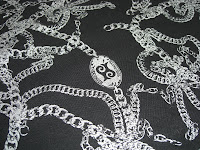 I had no clue who Todd Smith was and thought I had better investigate before cutting into this fabric.  I discovered this is a clothing line designed by LL Cool J. No disrespect to Mr Cool J but he is not reknowned for his design abilities as far as I know (which is not far admittedly). Never mind, no one has pointed and laughed at me yet and I like how my dress turned out.
It's probably a bit blingy for daytime but ideal for evenings out. The pattern was very easy, the only change I made was to leave off the belt and topstitching as there was enough going on in my print.  The only downside is that you have to watch what you wear under the dress as the square neckline is pretty wide. 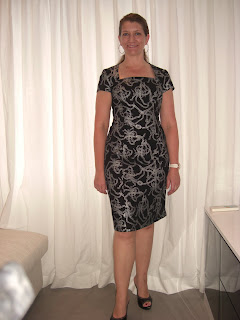 Well sorry for the long gap, must be that time of year when the brain wants a vacation- I have been sewing, but really not in the mood for taking photos and blogging, but now I am back!
First some comments to respond to;
Ann of Ann's Fashion Studio awarded me with a lovely blog award and I just want to say a huge thank you.  I feel bad that I dropped off the face of the blog planet as soon as she had given it to me.  Go check out Ann's blog if you haven't already seen it, she has been busy with a move recently too, but there are some gorgeous sewing projects in there, you have to see the Chanel style jacket.
Divitin asked where to get the pattern from my last post - Divitin, this pattern (and most of the things I make) are from a monthly magazine called Burda World of Fashion, or BWOF for short.  Actually I think it is just called Burda now - there is more information than you will ever need about how to use it and where to get it over at Pattern Review - click here.
Onto sewing, I promised co-ordinates, of course I ended up with separates that do not co-ordinate (yet)....
Here I am wearing the linen 122 shirt as promised; 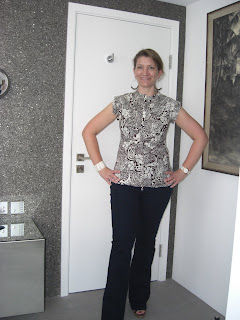 Then I decided to make another top from the same issue - the ruffled blouse 119 in a brown and teal silk print (this is where I envisioned my co-ordinating pieces - brown, cream, teal, maybe a splash of coral - ah the best laid plans...). This is an unusual print that I won't describe as I don't want to be responsible for disappointed google searchers ending up on a sewing blog, but it's subtle, arty and tasteful I think! 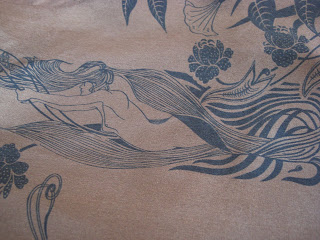 I'll be honest I absolutely hated making this and it so nearly became a UFO, but now that it is finished (hooray!) I am happy with it and can hopefully wear it without bringing back painful memories. The main problems I had, in a nutshell were;

- using fabric which moved and slipped around so much it was practically alive.  However for this style to be successful it really does need something very drapy. You have been warned!

- not reading the instructions and cutting layout first. If you make this note that the back piece needs to be cut in two pieces - upper and lower. I've seen Burda have pieces that need to be joined but never separated, I guess the same blouse back must be used in another pattern without a seam.  I just put the casing over where there should have been a seam at the back so my top is slightly shorter than it should be.
- the instructions for the concealed button opening were absolutely terrible and made zero sense to me. I knew what it needed to look like when it was finished so I played with pins until I figured something out. It's a bit messy on the inside and I had to leave it several days while getting annoyed but it looks OK now.

OK enough whinging here it is; 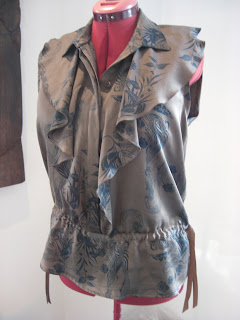 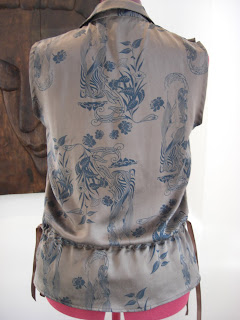 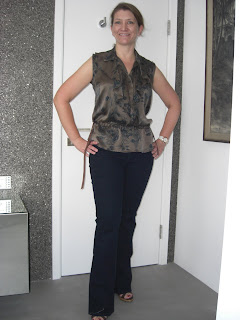 Next, the skirt that was supposed to go with these two.
Posted by AllisonC at 14:11 25 comments: 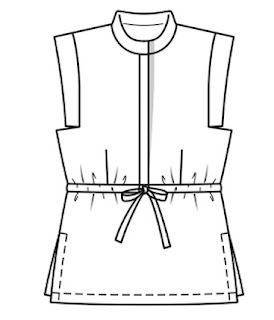 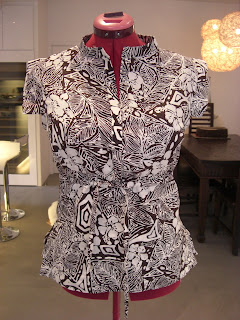 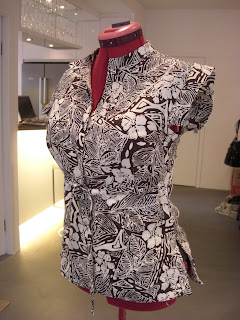 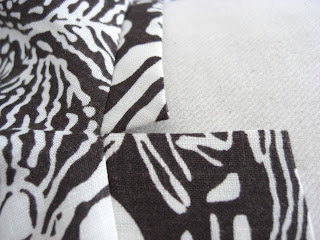 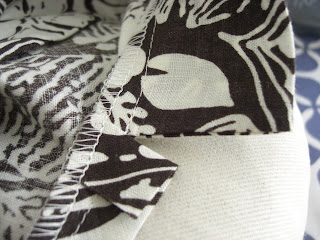 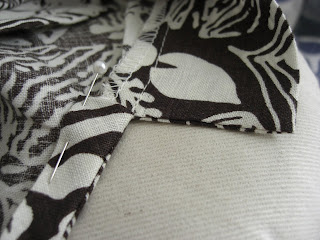 We've been in our new place for a couple of weeks now and I have finally got my sewing room set up.  This room also doubles as a guest room and office and although small has been cleverly designed so it can meet all these needs (though not at the same time!).  The room is too small to be able to take useful pictures of the whole thing, but has a few nifty design ideas that I will share here;
I have a cutting table built into one wall, to use it I just flip out two horizontal supports and pull down the table.  I can also store all my fabric inside the cupboards behind the table surface. 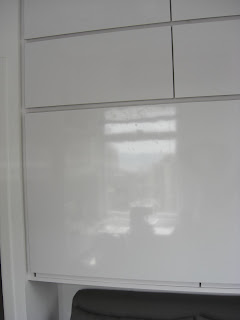 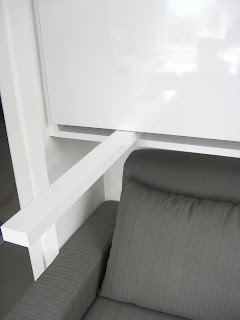 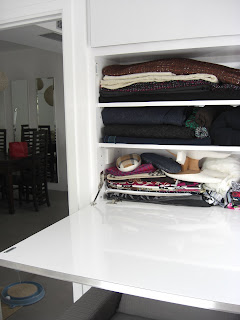 There is a sofa bed underneath that pulls out when we have guests staying - currently being made hairy by cats!  I also purchased a small tabletop ironing board from Ikea which is just right for pressing seams etc. and I can hang it up on a hook on the back of the door. 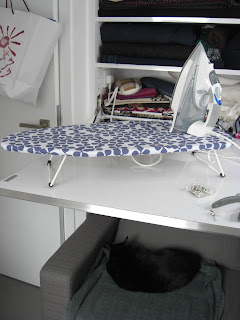 On the other windowless wall are more storage cupboards and a desk.  The back wall of the desk is a magnetic whiteboard which will be useful for scribbling and posting notes and ideas.  The left hand desk drawer is not a drawer at all, but a small pull out surface for my serger and I have an office chair on wheels so I can swivel between the two machines easily. 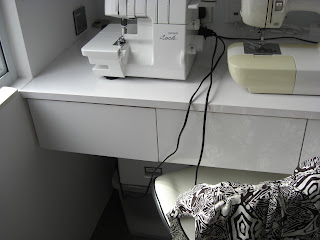 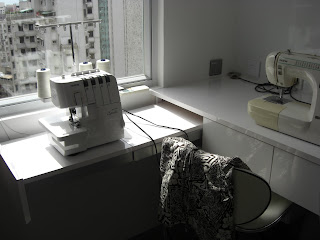 I have windows on the other 2 walls so lighting in the day is great.  For night sewing there are lots of ceiling spotlights and also a fluorescent tube above the desk surface.
So I am loving my little sewing space and am currently working on a top from the June issue of Burda in a brown and cream printed linen from my last post, you can just see it in the photos above - it's nearly there so more details on that next post.
Posted by AllisonC at 16:55 17 comments: