These are not the worlds greatest photos, but I am so excited to have finished on time that I couldn't wait! I will try and get some better ones when I am at the wedding on Friday. 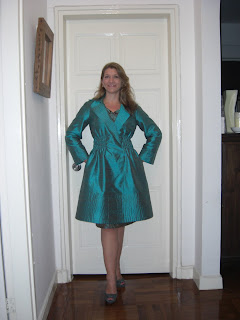 Coat - BWOF 02/2008-125 in silk dupioni interlined with silk organza and topstitched in a red/brown thread to co-ordinate with the crosswise threads running through the turquoise silk. The coat is unlined so all the seam allowances are turned under and slipstitched to the organza interlining. The coat is unlined and other people have made this very successfully with a Hong Kong seam finish, but since I was underlining with silk organza to minimise wrinkling in my fabric I made use of that. It took an age before I could even start sewing pieces together but was well worth the time, I really love the finished coat. I wish I had taken some photos during construction, it was amazing how it completely changed the look of the coat when adding the topstitching on the hem and also adding in the shirring at the waist.

Top - bodice of dress BWOF 11/2007-125 in silk brocade. This is a vintage inspired pattern and has sleeve gussets at the underarm - pretty tricky to do in a very ravelly fabric I can tell you. I also added a centre front seam and put the invisible zipper in so it opens from the bottom of the garment. 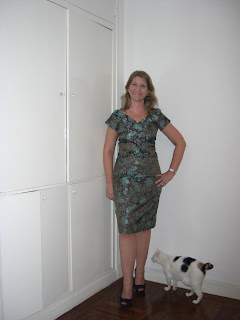 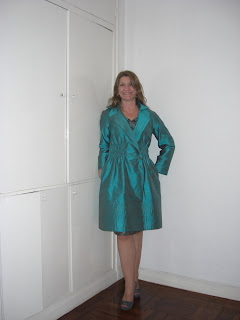 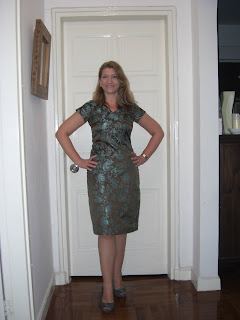 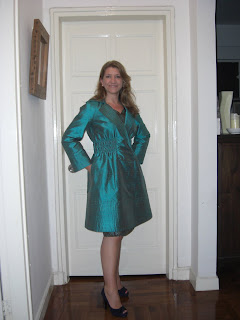 The shoe obsessed among you may notice that I am having a shoe dilemma. I found the perfect style shoe at Vicki's favourite HK shoe shop - Vickie's! Now if I had got my act together 2 weeks ago they could have made me some in brown and they didn't have any in stock so I bought 2 pairs in completely clashing colours that I know I will wear with other things. I actually quite like both, but please let me have your votes - purple or grey? 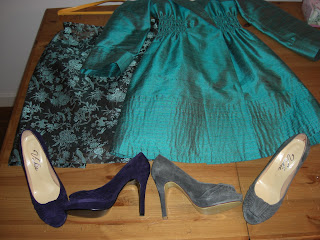 The coat of this outfit is BWOF 02/2008 - 117. I've loved all the versions of this that I have seen and have been wanting to make it for ages. It's almost done and I can say that I absolutely love this pattern. Was it the smartest pattern to pick when you have a tight deadline? NO! It's not particularly difficult, but it is incredibly time consuming. I just have some topstitching threads to tidy up and the snaps to attach, but I really needed a break & a coffee so here is a sneak preview. You can see the colours of the silk better in these photos - the topstitching is in the same red-brown that is shot through the silk. 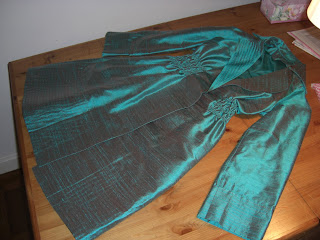 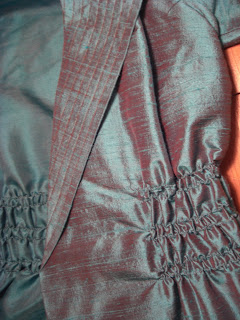 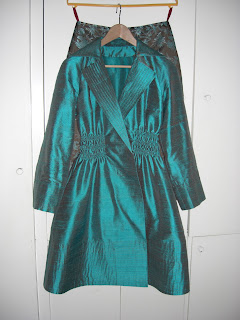 I've made some progress on my ambitious plans to make a dress and coat to wear to a wedding on Halloween, though I still have a lot to do.

I decided to start with the dress since I figured that would be less time consuming and at least I would be sure of having something to wear. I chose the BWOF dress pattern 125 from 11/2007 issue, but planned to change the skirt to something a bit less puffy. 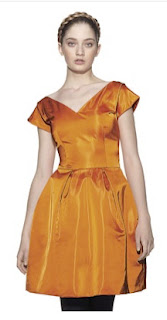 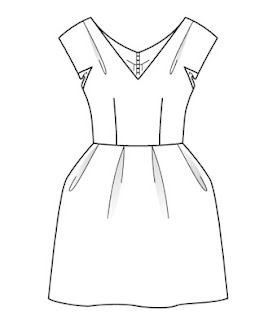 As usual my "organic" process led me to make a pencil skirt to attach to the dress and finally to a separate top and skirt instead of a dress. I really love this brocade fabric and wanted to be able to get more wear out of it. The skirt looks good with a brown jacket and boots I already have so that sealed my decision. It's an OOP TNT pattern Vogue 2218, I seem to have lost my photo of it, but it doesn't look terribly exciting on the hanger and you'll see it being worn soon.

The dress pattern is based on an original Burda vintage design and I think typically of vintage dresses, has a sleeve gusset piece under the arm. I stitched this part by hand to get better control in these small very triangular areas. The only other changes I made after trying a quick muslin were an FBA, a centre front seam so I could get a nice sharp v there and I also cut wide seam allowances so I could fine tune the fit later. I also put the zip in upside down once I decided it was going to be a top to make it easier to get into. 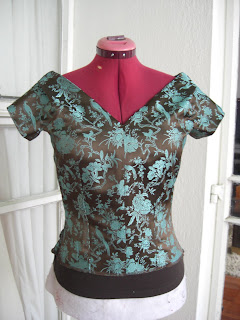 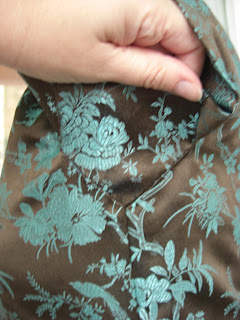 Sleeve gusset detail
The skirt just needs hemming and the top needs lining and hemming. I know I can get this done quickly and wanted to make a start on the more time consuming coat. I know it should not make any difference what order I sew the pieces in but psychologically it does! I'll show you where I am with the coat next time.

I'd like to give a huge thank you to Melody for nominating me for a blog award. I have no clue how to get the image onto my blog though (no awards for smart blogging for me!). Do check out Melody's blog and fabric store if you haven't already.

Thank you for the comments on my top in the last post, I'm definitly inspired to make the dress after seeing Toy's and Christina's fabulous versions. E asked where I got the brocade fabric - I'm afraid it was from a local store in Hong Kong - Yuen Fat fabrics in Li Yuen Street, Central if you are ever down that way! Avid Embroiderer, I tried to send you an email, not sure if you received it, let me know if not.
Posted by AllisonC at 17:56 8 comments:

Here is the top on me as promised, not that I am much more presentable today and the photos are rubbishy self timer ones but you can get the general idea and you can see the batwing sleeves which are going to take a bit of getting used to. I think I could lower the neckline a little now I see these photos and I definitely think putting back the missing gathers will be an improvement too. 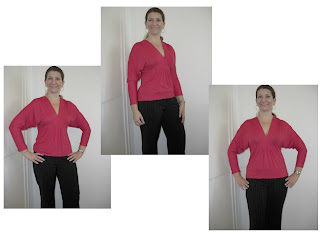 Yesterday I bought the fabrics for the outfit I'm making for the wedding on 31/10 (Halloween! I'm almost tempted to go in costume...). I am so excited about these I can't tell you, and the photo does not do them justice. I bought some turquoise dupioni for the coat - it's hard to see but it is shot with brown - and some brown and turquoise brocade with birds on it for a dress. I'll keep my blog updated with progress on them, got to get moving or I really will be going to the wedding in a pumpkin outfit. 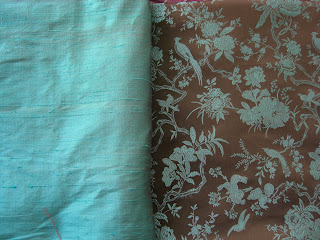 I really like the latest issue of BWOF and felt compelled to make something quick and easy from it straightaway. I plan to make the jersey dress 115 so decided to make up the top 114 to see how the pattern would work for me. 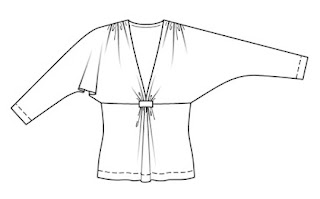 It's really easy to sew, the sleeves are cut on which speeds things up although it does use a lot of fabric, or you need very wide jersey. I had to add a centre back seam to fit the pieces on my fabric, but that worked fine.
Even the photo in the magazine makes this top look low cut so I knew some adjustments would be necessary. Fortunately this is easy to do - I simply sewed the centre fronts together about 1.5 inches higher than marked. However, this meant that the tab at the empire seam then looked a bit strange so I left it off.  For my dress I may consider raising the empire seam a bit at the centre.

It was only when it was all finished that I thought "hmm why does it look so different to the picture?" and realised that I had totally forgotten to put in the gathers on the lower part of the upper front pieces. Oops! That explained why the sideseams didn't match up very well! Still, it goes to show how easy to make and fit this top is that despite my silly mistake it still works. 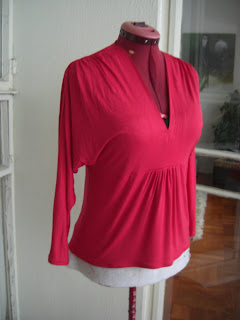 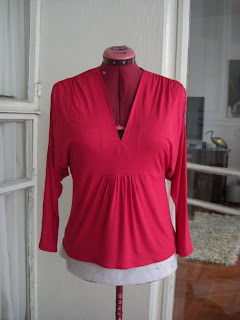 Excuse the wrinkles, and also no pictures of me wearing it yet because I look a complete mess right now, but definitely next time. I do like it although I feel a bit like a cross between Krystal Carrington or a bat wearing it!
For now you have Lindsay T to thank for this instead. She wanted to see a picture of me twirling my baton. Clearly my parents were not as delusional as me in thinking I was super glamorous and I cannot find any photos. I think this is from my pre baton twirling days, I'm on the left with my kid sister. Don't ask about the outfits, I don't have any answers! 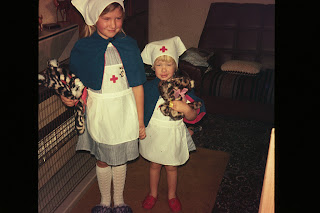 Sorry for the lack of postings lately, we've just had a couple of public holidays which you think would leave more time for sewing and blogging, but the opposite seems to be the case.

The jacket is finished, thank you for all your comments. In the end, although I drafted a facing pattern piece, I used Vicki's suggestion of finishing the neck with some spare fabric on the bias because I was really down to a few last scraps, even then I had to have 2 joins to make it long enough. But it worked - here are some pictures. 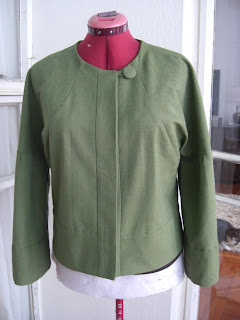 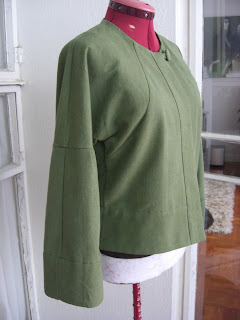 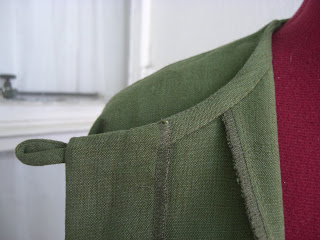 I do still want to make a purple version of this, but my sewing plans have been distracted by my October BWOF which I just LOVE plus I have an invitation to a wedding at the end of this month and I have been looking for an excuse to make this coat from BWOF 02/2008 for ages.... 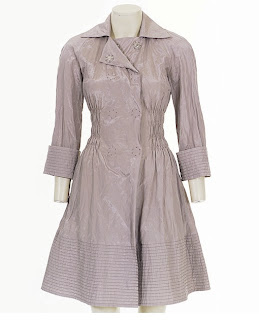 I've also been tagged by Sandy to come up with 7 random facts, so here goes;
1) I have developed a phobia of boats in recent years, it started with sailboats and has spread!
2) I have 2 cats, one of them is called Piglet because like many HK moggies she has a deformed tail. It looks like a short fluffy stump but if you touch it (which I only recommend if wearing full Kevlar body armour) it is all curled up like a piglet tail. Not that she was named by me.
3) It took me 3 goes to pass my driving test since and since then I have driven precisely twice - once in Spain and once in Canada, both on the other side of the road than I learned to drive. I'm not sure I could find the steering wheel in a car now!
4) I have a degree in Theoretical Physics which has gone the way of my driving knowledge. I can't remember a thing. That Hadron collider thingy that was in the news recently? - made no sense at all!
5) I can't stand milk - not a bad thing with all the recent news about tainted milk from China.
6) When I was a kid I was a member of our town's majorette troupe, I thought baton twirling was just the most glamorous thing ever.
7) I was brought up by my dad and my Nan. She is now 92 and lives in the Uk, it's hard being all the way over here sometimes.

I am fairly sure everyone else has already been tagged so I won't pass it on this time.
Posted by AllisonC at 14:05 10 comments: