I have nothing very exciting to show on my cocktail dress yet, I have managed to cut it out and apply silk organza underlining to each piece. This takes an age but I always do this with silk dupion, it really helps with wrinkling. I have a whole month to work on this so knowing me nothing will happen for 3 weeks and then there will be a mad dash to the deadline.
But I wanted to publicly thank everyone who responded to my moaning about not being able to get the August Burda - Reethi, Claire and Carolyn. I accepted Carolyn's offer first and was super excited when it turned up from New York last week on the same day that I picked up my October issue. I know lots of people didn't like the August issue at all but I liked the camel Michael Kors-y section even though I don't need umpteen camel coats and the Jackie O LBD.
I would also like to thank Gail for passing on the Beautiful Blogger award to me - do check out her fantastic blog - My Fabrication - and I am also going to recommend the lovely Burda offerers that I have linked above.
After reading Karin's story about giving birth on her bathroom floor I really cannot come up with anything to even begin to match that and I've been thinking about it all day so I hope you will forgive me if facts about me come out in dribs and drabs in future posts as inspiration strikes. For now I can tell you that I cannot see what the fuss about oysters is. I have tried a raw one and a cooked one and both were absolutely disgusting, never again!
Posted by AllisonC at 20:29 1 comment:

This is a DKNY pattern, rated easy - and it actually is very easy although admittedly it does look a bit like a nightgown before you tie the belt! 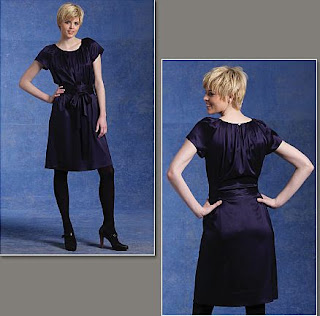 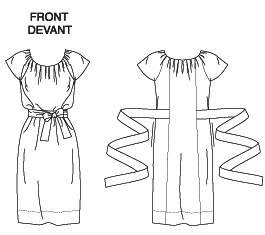 I made my version in the grey / pink border print satin from my last post. The fabric is actually very wide and has the border along both selvedges but I managed to squeeze the pattern pieces on so that the main body of the dress is grey with the border in the skirt (it is true I have a small obsession with border prints!).

I made a few minor changes to the pattern; 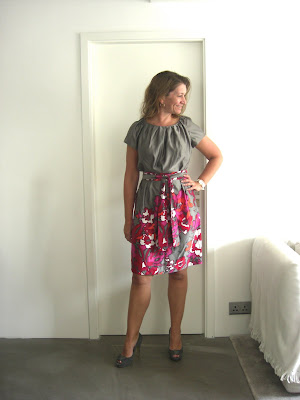 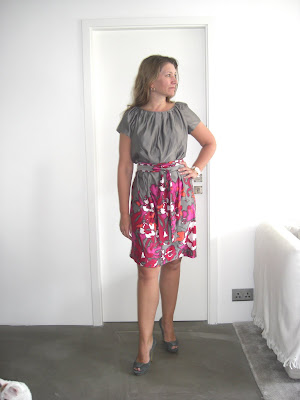 The ties are very long and wrap round the waist a couple of times, I really like how (completely by luck) my belt is plain grey in the back and patterned in the front. 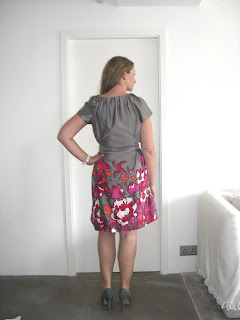 I'll definitely be making this one again, I think it will work for fall / winter with tights as shown on the pattern envelope or boots.

In cocktail dress news I ordered my fabric on Tuesday and it was delivered by hand on Thursday evening so I can get started on that now. Hopefully this will get me excited about the forthcoming party instead of feeling rather stressed about planning it from 6000 miles away.
Posted by AllisonC at 15:30 32 comments:

Well that's my story and I am sticking to it! Last week I went to the garment district in Sham Shui Po to check out trims - there are a couple of streets of stores that sell trims, buttons and other notions, it's a real treasure trove. However I thought I would just pop into the fabric market first to see what was there and managed to get so weighed down with fabric that I never made it to the trim stores! Here's most of what I bought (there is some other plain stuff), all HK$ 15-18 a yard (around US$2 - 2.50).
These are poly satins but the prints were irresistable, I'm already working on a dress in the pink/grey border print. 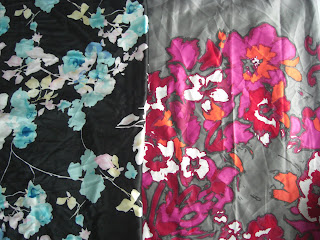 Another border print, this one in a sheer fabric of some sort. 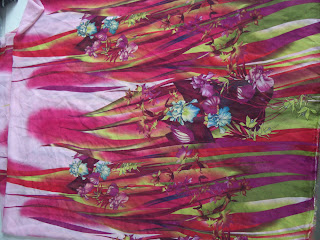 Jerseys! The black & white ones were made for White House/Black Market according to the printing on the selvedge. I admit I hadn't heard of them but they have an ad in my September issue of US Vogue. 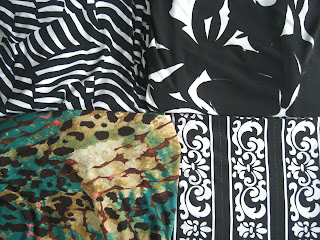 I did make a return visit to the trim shops on another day, so much inspiration, feathers, crystals, chiffon roses and much much more. I think I have decided on my fabric, a kingfisher blue silk dupion, so I will make a 3rd visit soon and try and decide between purchased trims or my self fabric experiments. You can't really see the colour here but it is aptly named and looks just like the iridescent blue feathers on a kingfisher. I ordered some swatches from Angus International one afternoon and received them the next day, pretty amazing service from both them and the HK post office. 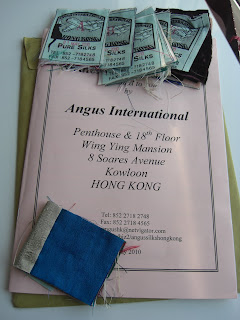 Thanks Kristin for posting a link to the Lacroix dress in your comment, it's easier to see the details in the plain green version. I do actually have the Patrones pattern but it is just too low cut for me and rather than fuss around altering it I decided to start with the Hot Patterns dress (I know, lazy!). As I say, the finished dress will probably look nothing like either!
Up next, my border print dress.....
Posted by AllisonC at 16:14 16 comments:

Party Dress - Part 1 of Many

This November will be our 10th wedding anniversary and since we left the UK for Hong Kong shortly afterwards we are going back to the place we got married for a big reunion party. It's a bit of a pain organising it long distance but I now feel ready to move onto the best bit - sewing a party dress.
I thought I would share my dressmaking progress here, starting with my initial thoughts and experiments with the caveat that the finished dress may end up looking completely different.
The dress code is "cocktail" (the men seem to be having all kinds of problems deciphering this) and I wanted to make a fun dress. This is the inspiration I am working with (for the moment at least);
Lacroix dress from Patrones issue 268 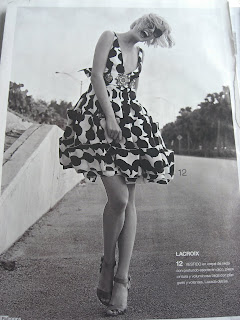 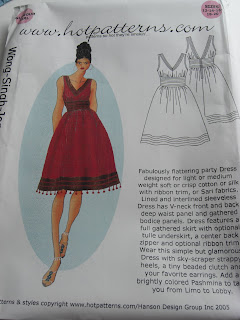 I made up a muslin of the Hot Patterns dress bodice, starting with a 12 and adjusting the back so that it wasn't so low. It looked very cute, but was a complete mess when I tried it on. Feeling a bit despondent I went back to the sewing room, took it apart and then realised that I had put it on backwards! Sewed it back up again and what do you know, so much better! I just need to take out some excess fabric in the front neckline (you can see it pinned out in the photo below - I've adjusted the pattern in several small areas rather than one large dart like this though). I know it seems rather extravagant to make a muslin from silk, but I have loads of this leftover from last years bridesmaid project. 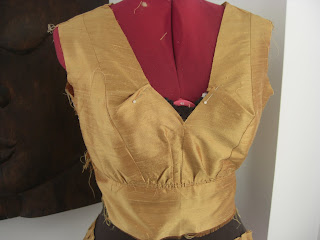 In case I can't find any trim I really want to use with whatever fabric I end up getting, I decided to experiment a bit with self fabric. I'm loving all these but don't worry I will try and restrain myself from using them all on the same dress!
Basketweave with strips of fabric 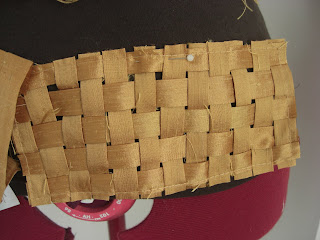 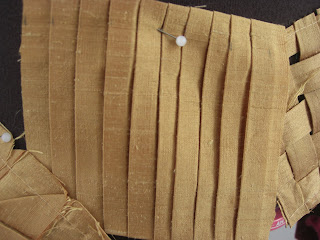 I've always loved this Burda coat pattern from 11/2007 so I tried out the origami effect. 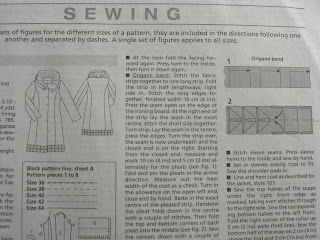 This is a rough version just done with a strip rather than a tube so you would not normally have raw edges showing. 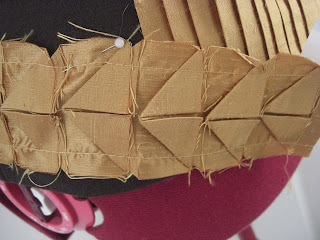