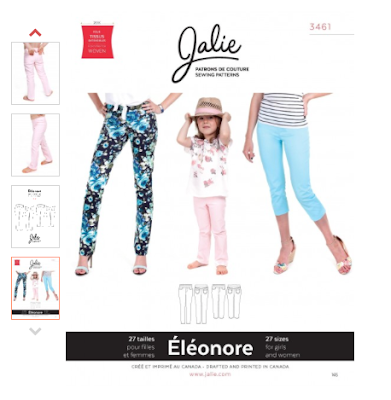 This Jalie pull on jeans pattern has proved really popular and I was curious to try it having only ever made Jalie tops before.  I used a medium weight stretch cotton sateen that I really thought was dark olive in the store when I bought it, but is clearly chocolate brown. 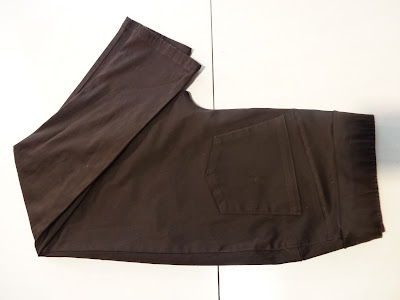 I used the size that corresponded to my hip measurement and the fit was pretty good except for some gaping at the centre back, before attaching the waistband.  I just took a wedge out of the back yoke centre seam.  I also took the waistband in at the side seams.  I made these adjustments completely independently of each other by fitting as I went so I'm not quite sure how I still managed to get the waistband to line up with the body of the pants - the wonders of stretch fabric I suppose!

The instructions, as always for Jalie are excellent and these jeans are very easy to put together.  The leg seams are sewn after the crotch seam which makes it easy to tweak the fit of the legs.  The only part that needs a bit of care is attaching the very curved front yokes to the front pieces to give the false front pocket effect.  I had to unpick one of mine as I messed it up the first time.  You could also just extend the front pieces when cutting and eliminate the front yokes altogether, but if you follow the directions to clip the curve and go slow you should be fine. 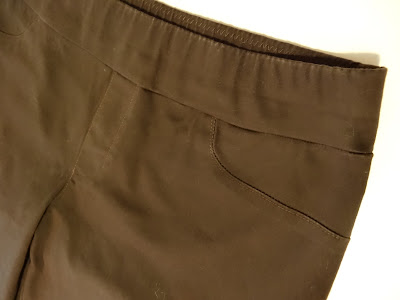 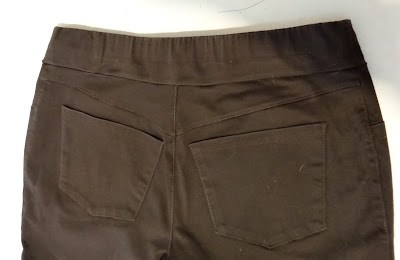 I really liked the waistband treatment on these, I haven't come across it before.  The elastic is zig zagged onto the inside of the waistband without stretching it and then the waistband is assembled and attached to the pants.  Obviously this method only works with stretchy fabrics.  I've seen a few people comment that they did stretch the elastic at the back and I might try that next time given the alteration I had to make to the fit at the waist.

This is the inside back waistband, the zig zag stitching securing the elastic in place is only visible on the inside. 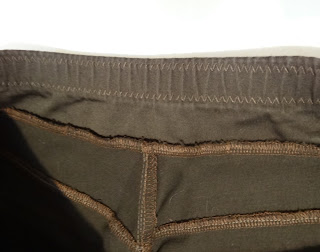 Overall I really like how these turned out, they are quite quick and easy to make, very comfortable and I can definitely see more of these in my wardrobe including the cropped ones for summer.  Actually I must confess I cut a pair in navy soon after finishing these, but when I went to sew them I have somehow lost the back legs!  I really need to have a good clearout of my sewing room, they've got to be in there somewhere! 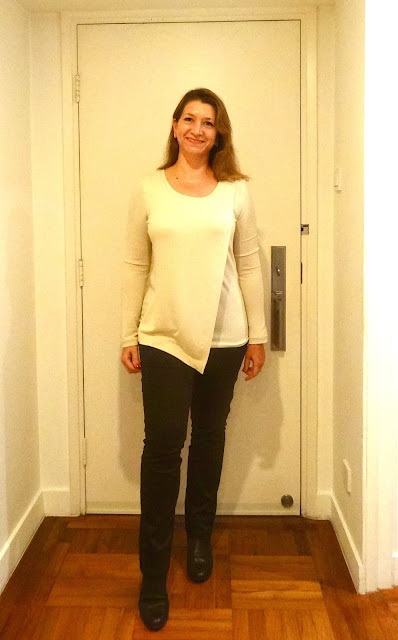 This was another piece to get me through the big Asian freeze - actually it got to almost zero C in Hong Kong which is the coldest it has been for 60 years so a few new sweaters were fully justified!

This is McCall's 7247, I made view B, but with the longer back of view C/D.  Most of the reviews I've seen have been for the curved front version shown on the model and a lot of people seem to have found that it comes up much shorter than it appears on the model and that the crossover can open up. Views A/B  don't have that problem as it is not a crossover, but an extra overlay on the front. 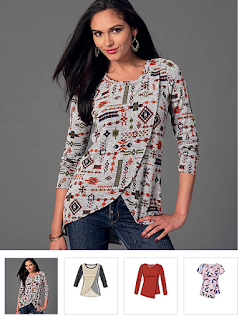 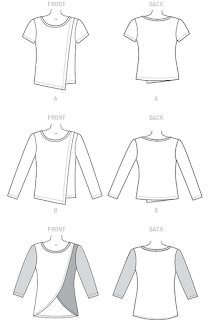 This overlay feature was perfect for the cream coloured sweater knit I used since there is no chance of it being remotely see through on the front.

This is a quick and easy top to make, the only change I made from the instructions was to sew the sleeves in flat.  I serged the seams and used a twin needle on the hems, where I had some problems with tunnelling, but was too lazy to unpick them - at least they all look the same, I'm calling it a feature!

I made a straight size 12 with zero adjustments, have to say my last few McCall's projects haven't had the excessive ease problem that I used to have with them.  This size 12 fits my size 12 dressform really well too (definitely no vanity sizing on chinese dressforms!). 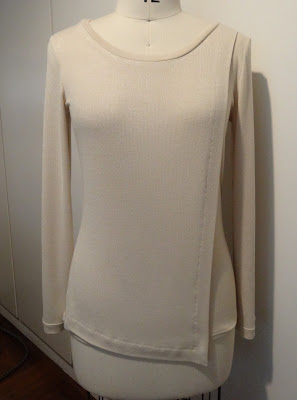 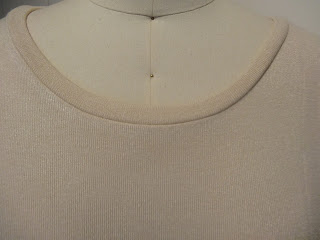 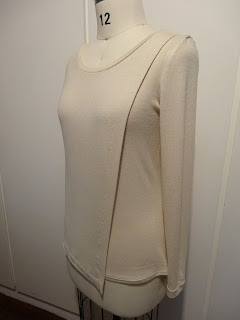 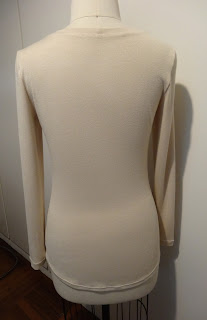 Wearing this in real life and actually moving around, that overlay does drape a bit more and can swing towards the centre front and pull on the neckline a bit.  I don't mind this, I think it emphasises the overlay more, but something to consider.  Of course I have totally failed to capture this in my photos where I wasn't moving around very much! 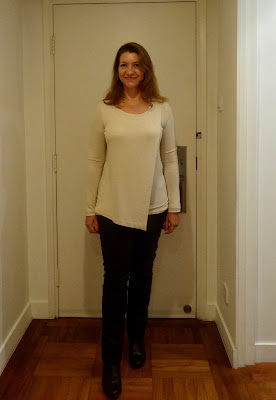 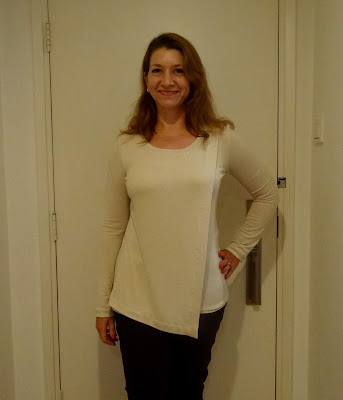 I was slightly put off making view A/B from the comments in some of the reviews, but I might try and modify the pattern so that the bottom layer extends right into the side seam so there is no danger of belly exposure!  Anyway, this is a good basic with a few interesting pattern variations and my cream version goes perfectly with my new brown Jalie Eleanor pants (coming next!) and will probably see a lot more outings before spring arrives.