Despite all my whining about Burda there are still some hidden gems in there. I suspect most of them stay hidden to me thanks to the sometimes crazy photography and styling, but I think I have unearthed another winner of a dress in the May issue. 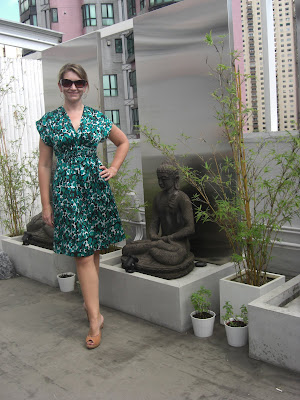 This is dress 103 also available as a tunic (104). Burda used lined chiffon but I made mine in a silk print which I left unlined. I made a 38 with no alterations - yippee - the only part where this dress is fitted is elasticated so it's easy to fit. 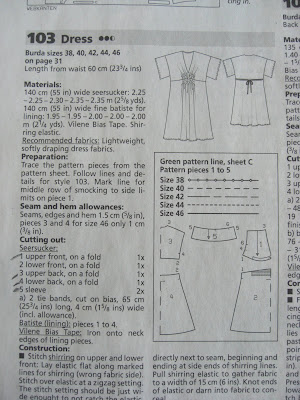 I made a couple of minor changes - I left off the sleeve bands simply because I liked the look without them for this particular fabric. (The underarm is quite low though so if that bothers you then the drapy sleeves will help). Instead of the self ties in the back I added a few rows of shirring in the centre to match the front of the dress. 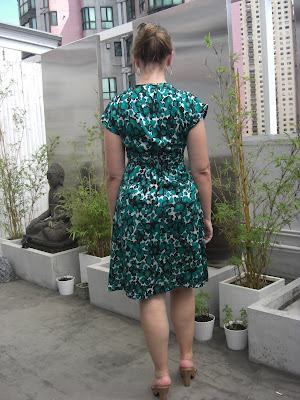 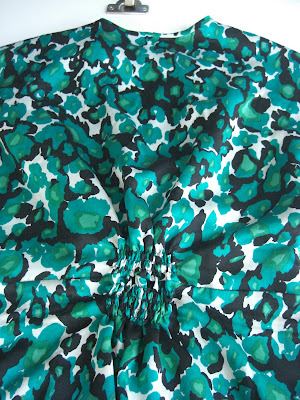 I should add that I didn't use Burda's method of zig zagging over the shirring elastic and instead wound it onto a bobbin and used my machine. If I make this again I will join the bodice and skirt seams before doing the shirring because using my shirring method makes it a bit awkward to do the seam afterwards per the instructions.
Since my dress is unlined I had to finish the v neckline somehow and used a strip of fabric to make a binding - I'm really happy with how this turned out. I found this Burdastyle tutorial for a knit binding really helpful to explain how to get the nice v. My method was slightly different since I was doing a narrow silk finish - I used a single layer strip and slipstitched it by hand to the inside neckline before doing the mitre stage. I hope this will make sense when you see their tutorial. Also amazingly for Burda I didn't find the neckline too low on this one. 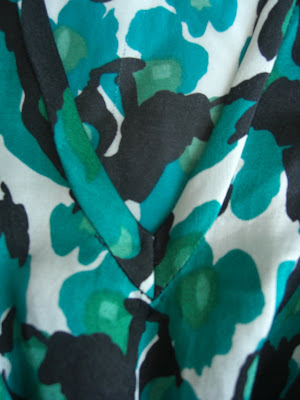 This is a bit more of a girly dress than I am used to wearing but I really like it and may well make another or even the tunic and take advantage of some of the great silks available here in HK that I always love looking at and never know what to do with. 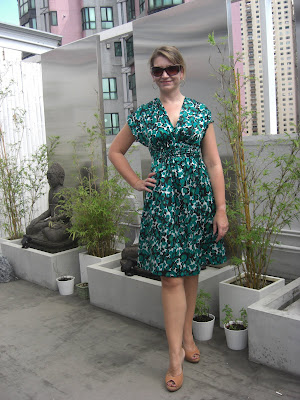 I don't know, I've failed to make any maxi dresses in the last 4 years or so that they have been around and suddenly I have made 2 in a row.
I'm off shortly for a few days summer vacation - I find I always want to make something new and I just felt like a maxi dress fit the bill. However I didn't want any bra issues with this one so I decided to use this McCall's 6069 dress pattern that I have made already and simply lengthen it. 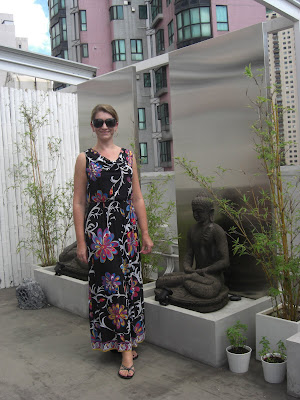 Let me note that McCall's reckons the back strap is optional - er no it's not unless you want to chance the entire top of your dress falling off! I know I said I made this so I could wear a bra with it, but really! I had to attach the strap at the end so it's not as neat on the inside as it's supposed to be but it works. And more importantly my dress will stay on. 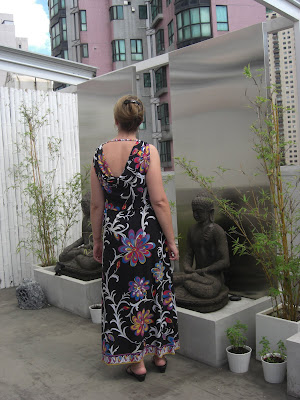 I used the jersey I bought at Elliott Berman on my recent shopping trip to New York. It's gorgeous quality and I am so glad I splurged on 3 yards , I only just had enough.
The dress is LOUD, but has a real holiday feel to it and I can't wait to wear it on my hols! 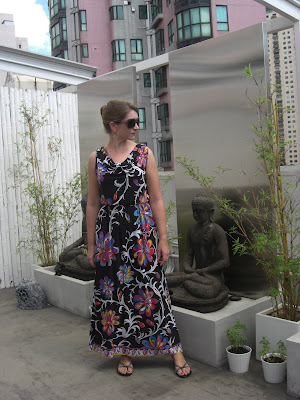 It was very satisfying finishing those pieces so quickly, however my sewing has since ground to a complete halt while I decide what to make next, so in the meantime here are some more details on the maxi dress.
This is the pattern, Butterick 4975 - now OOP. 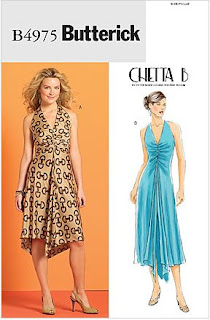 I made the longer version but still had to shorten it by around 6 inches to stop the front dragging on the floor. 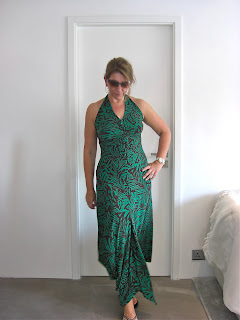 I left off the back zipper since it is a knit and instead added an elastic casing across the back just to make sure it stayed in place and covered my strapless bra. 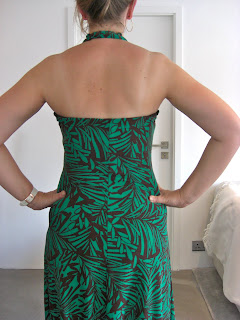 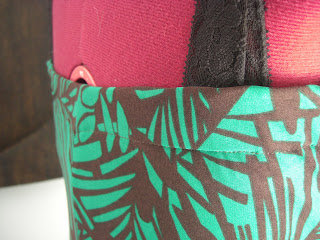 For the same reason I ended up raising the front neckline a bit and covering the now non-gathered part with 3 cover buttons that I was able to make from the material I cut off the hem. The neckline is much more flattering when its left lower but until someone invents a low cut in front strapless bra that works in my size this will have to do! 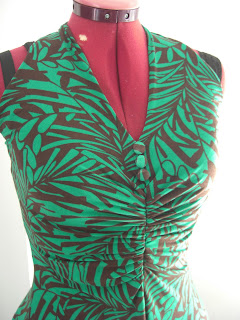 My strap at the back neck turned out to be a bit long so I kept a long overlap, added a large snap and a decorative button on top to make it look symmetrical(ish). 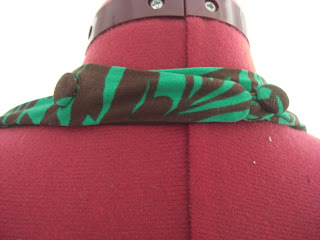 Apparently after all the delays with the August Burda magazine, no copies are coming to Hong Kong at all. Oh well, from what I have seen and read I am not missing much but it will be the first gap in my collection since 2004. Lets hope they can get their acts together for the September issue - though from the preview photos, I have my doubts I'll want to sew anything from that one either.
Posted by AllisonC at 13:46 19 comments: 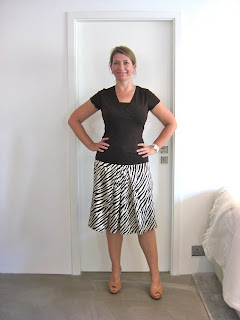 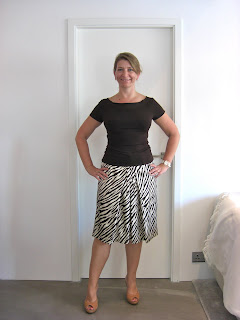 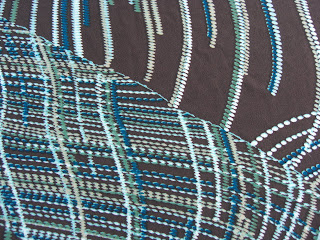 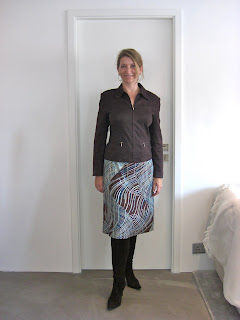 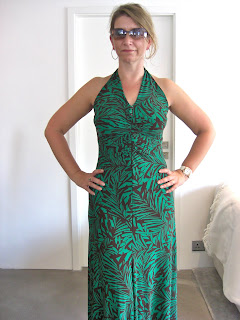 Thank you all for the comments on my Donna Karan dress, they came at just the right time. I went to an event where I knew there would be some impossibly glamorous fashionista women and although I was still a good foot shorter and 40lbs heavier I felt pretty confident in my new dress.
Somewhat less confidence boosting, but very funny, was the comment I received on the little girls dress I made saying how much my grand daughter would love it! Although this is biologically possible and I do take some lousy photos I am NOT a grandma!!
Anyway I figured that if I was going to post a parcel to the UK I may as well make it worthwhile so I made another little outfit. I hope I will get some photos of both outfits being worn and will post them here when I get them.
Burda 06/2006 - 135 Jacket 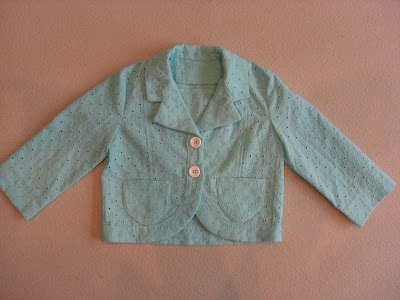 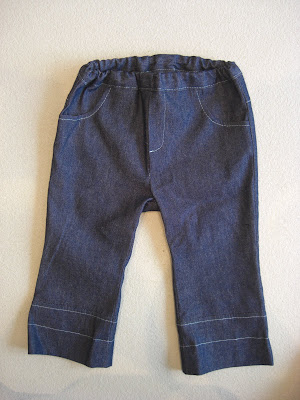 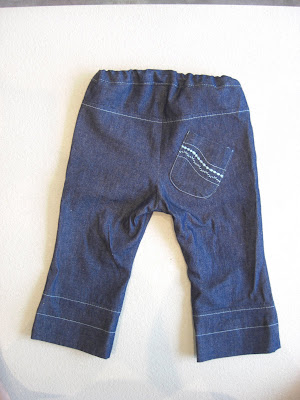